One of the best and most unique puzzle games ever made, Icebreaker is the brainchild of Andrew Looney (no, I'm not making his name up), eccentric puzzle game designer who has a penchant for all things pyramid-shaped. Icebreaker is best described as an abstract puzzle/action arcade game in which you control a pyramid, and your objective in each level is to destroy all pyramids on a grid while enemy pyramids stalk you.

Revolutionary games always defy adequate description. Probably 1995's most radically different game, Icebreaker is no different. Like Geoff Crammond's classic The Sentinel, Icebreaker defies all attempts at categorizing it, although elements of a puzzle game are most predominant. You have to guide a little pyramid around the screen, shooting and smashing into other pyramids before some "hunter" pyramids catch up to you. Sometimes you fight, and sometimes you lead your pursuers to their demise by tricking them into bottomless pits. One of the most fascinating things about the game is the variety of ways to get rid of enemy pyramids-- just when you think you've discovered them all, you'll find new surprises (and tougher pyramids) waiting on the next level. Easter eggs, hidden cheats, and many surprise items all add to the fun. Success in the game requires the combination of shooting skill, strategy, timing, and a lot of patience. With over 150 levels, fans of action or puzzle games, and just about anyone who enjoys a unique challenge, will be hopelessly addicted for days on end.

Note: the game's designer offers an interesting history of the game: "I created the original game and controlled the design of all additional game elements. I also wrote virtually all of the software for original version of the game, which was published by Panasonic for the 3DO Multiplayer. Unfortunately, 3DO ultimately lost the battle of the 32-bit video game machine, and if no one was buying 3DO players, then no one was buying games for it either. Luckily, Magnet Interactive Studios ported Icebreaker to both the Mac and the PC, and those versions were published by 20th Century Fox. Unfortunately (again), Icebreaker was released just as the bottom was dropping out of the CD-ROM market, so it wasn't a success on those platforms either, despite critical acclaim." 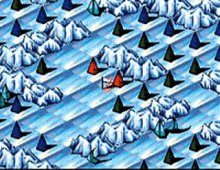