Gruntz is an addictive but vastly overlooked puzzle game from Monolith. A bit like Lemmings but with the addition of combat and more focus on puzzles than real-time precision, Gruntz will definitely appeal to fans of turn-based puzzles like D.R.O.D.. Quandary Review's good review of this game explains the mechanics and why you should take a look:

"It all begins one fine day with the happy Gruntz playing with their Toyz. Now Grumley lets his beach ball roll away and during the chase he stumbles upon three strange Purple Switchez which catch everyone's attention so that none of the Gruntz notice the Disgruntled hiding nearby. To cut a short story shorter, the jealous Disgruntled attack and the strange Switchez open up a wormhole to another dimension which happens to be the only way of escape. Through go the Gruntz with the Disgruntled hot on their heels, and you'll meet them all on the other side.

Here you join in the fun in this lively game which has two distinct modes: Questz where you must solve the puzzles and find the Warpstonez to rescue the Gruntz; and Battlez where you will face mayhem as you meet up the with the Disgruntled and overrun their Fortz, if you dare. But first it's advisable to begin with the Training Levels which will help you come to grips with the dizzy gameplay. Here you find lots of hints strewn about explaining exactly what is what and what to do.

Gruntz is a colourful and humorous bundle of fun as your charges keep up a chirpy dialogue during play and remind you that they are waiting if you take too long. In Questz mode the idea is to guide your Grunt (or Gruntz) through each of the 40 or so levels and negotiate the Hazardz such as Bridgez, Pyramidz, Spikez and Geyserz. You might also meet an enemy Disgruntled along the way. But don't panic (not yet anyway :) ) because there's lots of help at hand such as a variety of Switchez, Pressure Platez, and Teleporterz, and a whole collection of Toolz and Toyz. Although there's some combat involved it's easy and comical, you simply choose a weapon, or you might even be able to distract your enemies with one of the irresistible Toyz.

Don't get lulled into a false sense of security as you start out ... the training levels are very gentle. As you progress the Questz get more difficult with more and more devious Hazardz and a couple of Secretz thrown in to increase the fun factor. When you have completed the Questz you can then tackle the Battlez. Here you play against the computer and tweak the levels to suit your taste. There is also a Multiplayer mode for hooking up to another computer.

Trust me, this one is crazy and some of it might rub off on you if you're not careful. It's very similar to Lemmings for anyone who has played that enduring series, with obstacle packed mazes to negotiate and oodles of personality. Gruntz, however, presents a top down view and it also has the combat element. Fortunately, Gruntz are gooey and recyclable so if you find a straw you can suck up their gooey splotches and put them back in action.

Gruntz is a great family game, quirky and humorous, with some quite tricky levels to keep you coming back for more. Unlike Lemmings, you can save your game at any time and try different strategies to see you through." 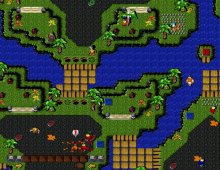 People who downloaded this game have also downloaded:
Lemmings 2: The Tribes, Lemmings, 3D Lemmings, Lemmings Chronicles, The (a.k.a. All New World of Lemmings), Marble Drop