I must admit I have no real clue about how to play this game. I can only guess for the most part, but it is kind of fun to guess the controls and what they would probably do. After all you are playing with cells and try to construct the basic elements of life. Who knows if good wasn't sitting before the controls scratching his head about what to press next - hehe. ;) The general goal of this game is to reconstruct the structure shown on the left side - you have some cells that usually reproduce thus increasing their total number - you now have to control your little friends to arrange in a way you want them to - to me it seemed that too much moving around will make them die, but then again... I might just have pushed the wrong button. It's definitely a game worth looking into, but it's not an easy thing for the everyday puzzle-fan - just when you think you understood how it works something new comes up and all your ideas about the concept are worthless. Then again... that's pretty much how life is, aye? ;)

When I was in high school (not THAT long ago ), the game of life was making a big splash in mathematics and biology... although it seems to us at the time that the best use of the theory would be-- you guessed it-- in games. In the game of life, each cell must be split according to a specific formula. In *this* game, you must split the cells in the right order so that the end pattern matches a given prototype. Quite fun and educational, with energy and control issues thrown in for complexity. 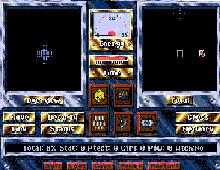