Fallout! is the superior sequel to Beyond Columns, Brad Taylor's excellent Columns clone. The game is much more obscure than its predecessor for some reason, despite being improved in every way, including sharper graphics and more special blocks. As in the original Columns game (which was ported by Nathan Meyers to the PC from the original X-Window version), your objective is to line up colored blocks in sets of three in a row to make them disappear. Expert Tetris players can start at a higher level if they prefer. Overall, a very nice little game that is a worthy addition to every Tetris fan's library. 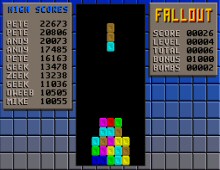