If the bomb hits a face of a different color than mr. Pacman look-a-like, the face and mr. Pacman look-a-like will swap colours and the bomb is destroyed. Should a face reach the top of the playfield, the game is over. Sounds weird? It is. Sounds easy? It most certainly is not, especially since the speed is constantly increasing. The game interface is very easy to use mainly because it running in a little window. The graphics and sound are average but isn't really needed in this kind of game anyway so this doesn't further attention.

Overall a simple and quite average puzzle game without anything special to offer. Still better than many of the other small games in this genre. Ands did I mention that the music can drive you crazy after 10 minutes? Well, it can.

Facesis similar to Wordtrisin its assemble-falling-pieces-into-a-recognizable-item concept: your task is to assemble different parts of a face properly (e.g. nose above mouth, etc.) to make it disappear. Assembling a "perfect" face (i.e. all parts belong to the same individual) yields a bigger score. The game, however, is marred by pieces being too undifferentiated from each other that makes gameplay overly frustrating. Good concept over all, but poor execution and little variety in falling pieces. 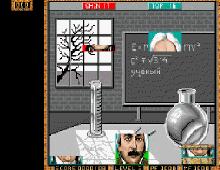