Combination Lock is an interesting game based on a never-aired gameshow concept devised by John Ricci. The object of the game is to earn the most money in two matches, rob the Vault, and make a safe getaway. A Combination Lock match consists of two rounds: the "Number Seeker" and the "Combination Cracker." The Number Seeker gameboard consists of 9 boxes, each numbered from 1 to 99. Before selecting a number, players are asked a randomly selected trivia question, with three possible answers. The first player to select the correct answer gets to choose one of the numbers on the Number Seeker gameboard. The game will then reveal what's underneath that number. If it says "LOCKED," the player receives no money and play continues. If the box reveals "OPEN," the player has found one of the three numbers in the combination of the Combination Lock Vault, and he/she receives some cash. If the box is hiding the "CASH," the player receives cash. If the chosen box reveals the "BURGLAR," then the player loses cash. In the second round, the Combination Cracker gameboard consists of 6 boxes containing every possible combination of the numbers revealed in Round 1. Here all players must answer more trivia questions to earn the chance to try a combination. The player with the most money at the end of two matches enters the bonus round, called "Combination Lock Vault." The Vault gameboard consists of 15 boxes numbered between 1 and 99. The player may continue to select numbers as long as there is cash behind them. After each turn, the player is given the chance to make a "getaway" - to keep all the money earned in the Vault and end the game.

Combination Lock the PC game features hundreds of trivia questions, decent EGA graphics, and the ability to compete against other human players. The game itself is not as fun as Jeopardy!, but if you are trivia fans, you will likely have a lot of fun. First published by Villa Crespo in 1992, the game has been released into the public domain by its designer and copyright holder John Ricci. So here is your chance to try one of the rarest games and a fun gameshow game. Recommended. 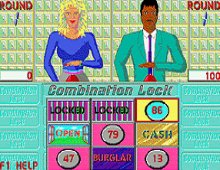