DUOtris is a fun Tetris variant that merits attention of fans of falling-block games, even though the interface takes some getting used to. Shockedfrog's thorough review at his site summarizes the pros and cons quite well:

"DUOtris is a puzzle game with some interesting twists and online highscores. [The game was] originally created mostly to test a new online highscore system, but has developed into a pretty good game. The player controls 2 grids at the same time, one below the other, and 1 piece drops into each grid at the same time. To remove pieces, 3 or more of the same colour must be connected - not neccessarily in a straight line - so it's similar to Puyo Puyo/Mean Bean Machine. As usual, if the blocks pile too high, it's game over. From level to level, the game gets harder in a variety of ways, and thus an addictive mixture of scoring and progress is born.

The game has two different modes of play - Arcade mode, which is a lot easier thanks to the powerups, that can easily turn a near-game over situation into thousands of points, and Classic mode, which is purely about matching blocks and takes a lot more skill to survive longer. Add this to 4 different difficulty settings, and the game is suitable for a wide range of players.

This game is let down slightly by the controls - they're as reponsive as they can be, but trying to keep your eyes on 2 screens at the same time, especially when one of them is upside down, is a bit of a hassle. Although it's not too noticable at first, when the blocks start piling up it becomes nearly impossible to see what's going on at opposite ends of the screen. However, from version 1.01 onwards, there is a indicator that tells you the colour of your next piece. This does make it a lot easier to control both sides at once, but also makes Arcade mode a little too easy as triggering powerups becomes a lot simpler. The Classic mode is still a good challenge - it's a little easier than before, but the indicator seems to suit the Classic mode and make it more fun than in previous versions.

The game is sure to keep you addicted as you try to reach the online highscores. There are several options - top 10 daily, top 10 of all time, and a 'Hall of Fame', which shows the top 5 of all time, and only allows one score per name. These options mean there's a pretty good system up, and I hope people use it.

Just like DUO, the graphics have a nice simplistic style with impressive effects, and the music, which is quite similar to the tune in DUO, suits the style. Although it's not quite a classic, this game belongs on any puzzle game fan's hard drive, and should also appeal to freeware gamers in general. This update reduces the file size a little bit too, giving you another reason to try out this game." 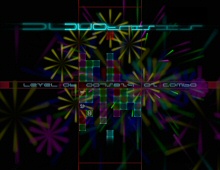