Dr. Robotnik's Mean Bean Machine and Columns III: Revenge of the Columns are two excellent Windows version of SEGA's popular SEGA Genesis puzzle games. The games are both Tetris-style "falling blocks" games, but with some differences. Dr. Robotnik is more similar to Puyo Puyo (and, in fact, SEGA uses characters from Compile's classic and creates their own storyline): you rotate pairs of jelly-like blobs them to connect at least four of the same color. In addition to normal horizontal and vertical lines, you can also score by forming C-, F-, H-, L-, S-, and T-shaped crosses or even small 1's and 4's. The range of freedom is restricted only by the fact that you cannot connect blobs diagonally. In a fun "combat" mode (against another player or the computer), a high-scoring combo will cause some beans to magically appear on the other side to cause headaches to your opponent. Like all fun Tetris games, creative massive combos is a lot of fun, since that creates a massive amount of "garbage" blobs on your opponent's side, causing instant death. The combat mode in Columns III is similarly fun, except here you are playing with jewels instead of blobs. Successful combos push up your opponent's "base," thus giving him/her less playing room. You can even get special jewels by performing combos. For example, a triple chain reaction (where 3 sets of jewels disappear simultaneously or consecutively) causes the flashing jewel to appear. When you make this disappear, it will cause some very nasty effects to your opponent - my favorite being forcing him/her to play upside down! :) You can even play a 4-player game in Columns III (presumably if you have enough gamepads), making the game even more fun.

Both games are worthy additions if you are a Tetris or falling-block fan. They are especially fun if you have a friend to play against. 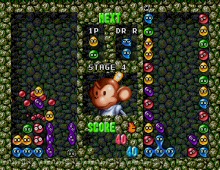 People who downloaded this game have also downloaded:
3D Lemmings, Incredible Machine, The, Lemmings, Columns III: Revenge of the Columns, Lemmings 2: The Tribes