Chain Reaction is a popular puzzle game that was invented in mid-1980s for the Commodore 64 and other computers, and new versions are continually being made for new systems, including Windows and handheld computers. The game plays somewhat like a cross between checkers and life, although it is more unique. Players take it in turns to add bombs to a grid of squares, taking new squares of their own or adding to squares that already contain their own bombs. When the number of bombs in a square reaches a certain level, the square will explode and shower the bombs in to each of the surrounding squares, changing any bombs in those squares to the color of the player who started the explosion. These explosions can cause other squares to reach their explosion point, and thus chain reactions of explosions can take place right across the board, and so on. The objective of the game is to eliminate all the bombs of the other players, so that yours are the only bombs left on the board.

This download is one of the first PC versions of this wonderful game. It is freeware, and the computer AI is quite good. 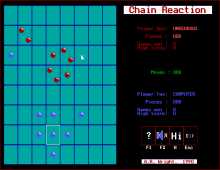 People who downloaded this game have also downloaded:
Block Out, Deflektor, Drops of Light, Atomic, Chagunitzu