Crack Attack is a good remake of Nintendo's popular Tetris Attack game, offering both faithful gameplay to the original and LAN capability. If you have never played Tetris Attack, here is the summary of the rules: "Slowly, your stack of blocks grows from the bottom, and you've got to make sure it never reaches the top. Because, once it does, you lose! To eliminate blocks from the stack, line up at least three of one color, horizontally or vertically. Once you do, those blocks disappear, and put off slightly your inevitable demise. To add to the excitement, chunks of red garbage will fall from above. It is impossible to eliminate this garbage directly. The garbage is your opponent's way of sticking it to you; and, conversely, your way of sticking it to him. While any old slod can eliminate a ho-hum three blocks, a true master will eliminate four, five, or even more blocks at one time. And when he does, not only will he be rewarded with a little light show, but garbage will come raining down onto his opponent's stack! Just remember, the bigger the elimination, the bigger the downpour. Beyond the multiple elimination method, there is yet another technique to generate troublesome garbage. I speak of the dreaded combo. Whenever you eliminate blocks, it's likely to cause other blocks to fall, either simply because they were above the eliminated blocks, or because you have freed them from a piece of overhanging garbage. If, when these blocks fall, they cause a second elimination, you've got yourself a combo. If you're good enough to keep the combo rolling, your combo multiplier will increment for each elimination. And, when the combo is finally complete, a massive chunk of garbage will descend upon your opponent, it's size proportional to your final multiplier."

In addition to retaining all the fun of Tetris Attack, Crack Attack adds several advance featureds such as 'X-Treme' mode to challenge Tetris veterans. Tetris Attack may no longer be considered the best multi-player Tetris after the advent of TetriNET, but it is still an outstanding and addictve game - especially when played against another human player. Highly recommended! 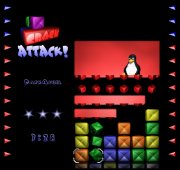