One of Apogee's most underrated games, Boppin is a fun puzzler that grows on you as you play, even though the learning curve is somewhat steep. Games Domain's review summarizes the pros and cons quite nicely:

"Boppin is a puzzle game that is a bit hard to describe. The object is to pick up and then 'bop' (or throw in a diagonal) objects created at a generator, in order to hit similar ones. You lose a life if you miss your shot (i.e., when you throw out of the screen or hit a different object). When you bop right, then the block you hit and all the ones adjacent to it disappear. The more objects disappear, the higher the score. But more importantly, if by bopping you succeed in making a pattern of objects disappear (i.e., a square, a cross...) then you score big and free a 'monster' (see story line, below). The level is over when you've bopped everything.

Sounds a little abstract? Well it is. The flowers, the blue and green diamonds are the 'objects' you need to bop. Yeet (the hero) is standing on an elevator, holding a green diamond and ready to bop. The little dolmen with the runes on top is the generator. Another object will pop out there once you throw the one you have. Other gadgets, besides elevators, include bonus items you can pick up here and there, mystery spots, which give you more bonus points, and repulsors, which deflect objects you throw at them. A very cute feature of the game is that the whole scenery changes at every level. The objects you're throwing, the background, the generator and elevators are different every time, giving you a wide variety of settings (for example: a sushi table, a warehouse, a temple...). This would not be all that amazing if the graphics weren't also of good quality. I must also say that the puzzles are in general imaginative and some require serious enough thinking, without being impossible to solve. Of course, if you try to get a perfect score on every level (by making all the patterns possible) then things get more challenging.

Another nice feature is the two-player mode. Ever played a puzzle game with a friend, when you friend controls the keyboard and all you do is yell at him or her to 'move left' or 'jump' or whatever. Well not in Boppin! Here, two can play at the same time on the same puzzle and try their own ideas. This requires a joystick, though. The game also lets you save at any time, and you get three 'continues'. You can also restart a whole level if you're not satisfied. By saving/loading/restarting you can get perfect scores without losing lives. Another effect of the game is that it makes you practice aiming at a 45 degrees angle."

I had a lot of fun with Boppin, although I found it very confusing at first. If you take the time to learn how to play it, though, you'll be amazed at how devious some of the puzzles are, and how addictive the game can get ;) A definite must try for every puzzle fan. 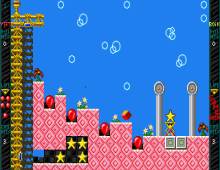