Floorball is a sport that was invented in Sweden in the early '70s. Based on American street hockey, it's a game with two sides, five players and a goalkeeper on each side. The idea of is to get a small plastic ball into the goal of the opposing team. In Finland and Sweden, floorball has become one of the most popular sports among all age groups.

MER Innebandy is the only computerized version of the sport, despite the fact that it was published already in 1996 as a freeware promotional title - one of UDS' first releases. It features the entire Svenska Elitserien - the national league of Sweden - with real teams and actual players as of the 1996 season. It's just too bad that no one outside Sweden have ever even heard of them.

As a great fan and player of floorball I would really, really like to find this game interesting and fun, but alas, I can not. There are simply too many flaws in the design. MER Innebandy pretty much ignores all the elements that make floorball fun: there are no dekes, no amazing air-hooks or other tricks, no spectacular fingertip saves by the goalkeepers. The players can only either shoot the ball or pass it across the floor, and the goalie does nothing but sits on his knees and moves sideways. The defensive player can try to take the ball away by hitting the opponent to his stick. That's all.

In real floorball, challenging your opponent plays a vital role, as well as long passes and using the goalkeeper in opening the game. Well, not in MER Innebandy: you cannot make any tricks with the stick, there's no way you could make the ball fly more than a foot above the floor, and the goalkeeper can not make any long throws.

The rules of the game are really vague and have almost nothing to do with actual floorball. There are no line changes, penalties or penalty shots, and the only way to foul your opponent is to hit his stick with yours and that results a foul only about once in a period. The rules also allow you to for example score goals from a free shot that results from the ball flying over the boards, which in real floorball isn't possible. The players have the real names of the actual players, but they all look the same and there are no differences between their skills. The game modes available are a friendly match (either against the computer or a friend sitting next to you) and a championship season, and the only difference between them is that in the full season you don't have to choose the opposing team by yourself. Also, managing your team is limited only to choosing between four different formations. The three difficulty levels offered affect nothing else but the speed of the opposing team - the stupidly straightforward AI doesn't seem to change to a way or another.

The graphics and sound effects are okay, and the controls feel surprisingly sharp. The game is in real 3D, and it runs smoothly on any Pentium class computes - just don't expect any special effects. There are two cameras to choose from, and interstingly the whole game feels somewhat more playable when played in a sideway camera than in a typical chase camera. The commentary is almost non-existing as the guy has only about 10 phrases, and it's only available in Swedish.

MER Innebandy is a rather disappointing game. Clearly the programmers have taken the easy way out without even trying to make a good simulation of floorball. It makes me sad, because there is just too much potential wasted here. Hopefully soon someone will notice the lack of a proper floorball game - until then, MER Innebandy is what we have to settle with. Unfortunately. 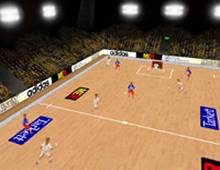