Another superb freeware shooter from Japan, Warning Forever is similar to BulletML games like rRootage - addictive games that are turning "abstract shooters" into a new and exciting genre. Warning Forever packs enough innovation to set itself apart from other BulletML, however. To begin with, you don't battle countless hordes of alien ships in this game: only the "boss" ships, one by one. These boss ships are drawn in 'abstract' funky style, and are automatically generated (using an algorithm not dissimilar to how swarms of enemies are generated in rRootage). There is no defined number of ships in the game. Instead, you have 120-second timer from which 20 seconds are deducted every time you die. You gain seconds after defeating each boss. Naturally, each new boss is more difficult to beat than the last, with a lot more firepower and stamina.

Similar to the likes of rRootage, Warning Forever is a refreshing and innovative shooter that is very addictive - albeit very difficult. If you like shooting games, this is another game you shouldn't pass up. Also, in contrast to most Japanese shooters, the game even comes with English help file... not that you need to understand Japanese to grasp the controls. 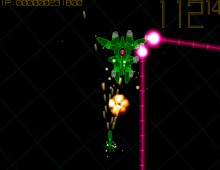