The Ocean Battle is an exceptional freeware game - one of the few that boasts such outstanding production value that will make you wonder why they are released as freeware instead of shareware. The game puts you behind the cockpit of a modern jet fighter, sent to complete 3 missions of increasing difficulty. completely immerses you in its scenario. The 3D graphics in the game is exceptional: everything from the environment to ships and airplanes are lovingly modelled and rendered. Too bad there are only 3 missions in the game, but at least they are fairly challenging and nicely varied (ranging from air-to-air combat to air-to-ground sortie, and finally to air-to-ship showdown against a huge battleship). Although basically an arcade game, there is enough realism to qualify it as a "light" flight simulation, including decent flight physics, airplane models, and details such as a radar that shows relative positions of enemies.

The game is in Japanese, but you shouldn't have problems figuring out the controls, which are essentially this: cursor keys to move the aircraft, A & Z keys to increase and decrease speed. The arrow icon at the top of the screen is used to acquire target. If you enjoy quality shooters, The Ocean Battle is simply a must-have. Highly recommended. 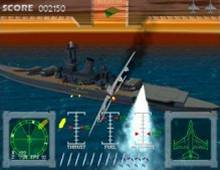