One of the most unique and fun little games you'll ever come across, Oden Todo Fish is a fast-paced fishing game like none other. Forget realism or the drill of arduously charting your course to a fishing spot--here you are riding a sea lion in the Japanese anime world, with only one objective: catch lunch for your two friends (twins?) who are waiting to cook anything edible in the giant soup bowl.

Although the game is in Japanese, the controls in Oden Todo are so intuitive that you'll quickly catch on the controls. Pressing SPACE BAR starts the game, left and right arrow keys move your sea lion around, down arrow key sinks the hook, and SPACE BAR brings up the catch. That's all there is to it, but like all good action games, the trick in Oden Todo is how to strike a perfect balance between quick reflexes and timing. Not only must you catch a fish, but you must get your catch *into* the bowl, where your two friends are waiting. To complicate matters, not everything you catch is edible: boots, cans, spike balls, and purple fish are all bad-- they reduce your satisfaction bar (i.e. time remaining). Each fish you catch earns a certain number of points, and the goal is to maximize your score before time runs out.

Despite its simplistic controls and very basic premise, Oden Todo is a great coffee-break game with a strong "just one more try" addictiveness. Highly recommended to everyone who wants a quick break from serious games. 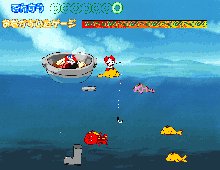