This is the Italian version of Championship Manager 1, and if you're into Italian footie, this is the game for you. Although it's a revision of CM1, it's greatly enhanced. An utterly playable game, albeit the player datas are of course a bit out of date today.

One of the first manager games expanding from the somewhat standard English leagues. Championship Manager Italia added new standard for football manager games by offering the most detailed game of the Italian football leagues including both Series A and B and having teams from Series C as well.

Championship Manager Italia was together with the original Championship Manager the first game to offer detailed statistics about each player in each club for every series in the Italian leagues. You can see 9 different stats for each of your players, the preferred position and whether they are right or left footed. You can setup pretty much any tactic you want to including telling your players to make forward runs if you want them to be more offensive in their play style. Other manager features include management of the staff, negotiating with the players, player purchases and decisions regarding how the players are doing and their discipline (you can give players a raise, fine them and much more). 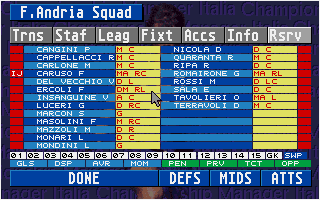