Ah, the good old Championship Manager! Who can say that there is better football management game anywhere in the world? Sure, the new versions are all better than this one, but I meant the complete series, not just this one!

CM93 offers you to play as a manager of any of the English teams in all the divisions of 1993. Pick your team and do your best in the next seasons on your way to the top of England and Europe. Buy, sell, arrange friendlies, play cup, championship and Euro games... Brilliant!

Feels good to play with those '93 stars such as Barnes, Klinsmann, Van Basten... 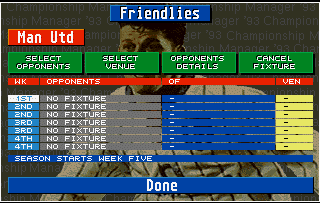