Ralf Glau's second game following Hanse, Vermeer is an interesting trading oldie for up to four players. All texts in the game are in German. Set in the year 1918, the world is at war, the economy in turmoil. Players slip into the role of Walther von Grünschild's (aka Vico Vermeer) nephews in hunt for your uncle's stolen paintings, a collection of some of the most valuable and famous paintings the world has seen. The player able to gather most of the lost paintings can be sure to get most of Walther von Grünschild's heritage.

You start with 50,000 DM. However, you will need far more to be able to get back the collection by taking part at auctions located all over the world. Many possibilites are open for you to gain access to the much-need money. You can build-up plantations for coffee, tea, tobacco and cocoa; make money by trading with shares, dollar and accepting profitable option deals. Random events such as lottery wins or donations for your painting galleries will help in your task.

Overall, the game is able to provide the player with a worthwhile mixture of trading and building elements, all touched-up with the nice aspect of taking part in auctions and putting together galleries of the paintings you have bought. Presentation is very spartanic and sadly you won't be able to recognize the paintings by their image in the game as seen in the Amiga version. The interface is kept simple and straight-forward, so you should be able to get going without a manual.

As with all games by Ralf Glau, it's designed as a multi-player game, the single-player mode doesn't offer a lot of enjoyment in the long-term. Not everyone's taste, but people fond of trading games should give Vermeer a try. Requires a slow-down util as the real-time auctions will run too fast on modern computers.

In 1997, Ralf Glau together with Ascaron released a remake of this oldie called Vermeer - Die Kunst zu Erben. 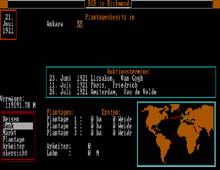