Hanse is a classic trading sim based around the trading association Hanse set in the 14th century. I remember playing this one for many hours on the C64. Some computer magazines trashed the game back then, but nevertheless it became very popular. Build and send out ships, trade with goods to build up a trading empire and to earn as much money as possible. There are no computer players, so Hanse is most fun played together with some friends. In 1994, Ralf Glau together with Ascon released an enhanced remake of his own game called Hanse: Die Expedition, which is also available for download from this site. 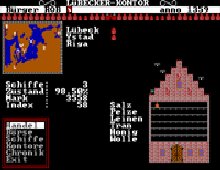