Tennis Cup is yet another tennis simulation that came out in the early 90's. Graphically, the game is a beauty with typical Sablons characters and design. It offers many options and play modes, such as Davis Cup matches, doubles, tournaments and most notably a split-screen mode, making two-player games playable from both sides of the court. However, that split-screen is also the screen you have to cope with in single matches. This makes judging lobs a bit of a problem. The major flaw in gameplay for me is the fact that you are almost unbeatable near the net, while good ground-strokes happen very rarely. Overall, not as good as Great Courts 2, but quite nice for a change. Also take a look at its better successor Tennis Cup II. Note: All in-game texts are in French, but that shouldn't be much of a problem. 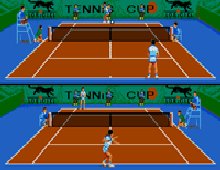