From MobyGames' description: "A dragon has taken over the Castle of Mystikar. To defeat the dragon, you must find the parts to build an enchanted knight which are spread throughout the castle. Numerous locked doors, many of which need to be opened in the proper order, block passageways. Roaming the halls are numerous slime worms, who will swallow you whole or fall asleep if you can feed them some flowers first. From any of the castle rooms you can access your hideout, which allows you to store useful items and clues you may find, and also pause the game. Each section of the castle has a time limit, and gets progressively harder. A castle builder is also included allowing players to create their own maze and puzzles."

Programmed on the same engine that powers The Robot Odyssey, Gertrude's Secrets, and Rocky's Boots, Think Quick! will look very familiar to anyone who has played any of these three classics. Unlike those three games, however, Think Quick! isn't designed to teach kids any one subject, but more of a "problem solving exercise." It can even be considered an introductory-level adventure game, because the key to solving many obstacles lies in picking up and using the correct item. So if you are an adventure fan and have kids, Think Quick! will serve as a nice introduction to the genre. The included castle builder is a great extra that is easy to use, and may entice your kids to build their very own adventure game. Highly recommended! 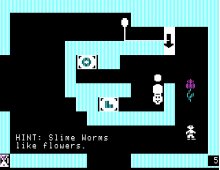