Pong & Kooky's Cuckoo Zoo is the last release in EA*Kids' quality but short-lived product line designed for young children. This preschool title features nice background graphics and animations, recorded speech, and over 15 mini-games scattered cross the zoo. Kids can drive a 3D train through the zoo, stopping whenever they wish to take a closer look at animals. Attractive cartoon animals and fun mini-games will entertain preschoolers while they learn about animals. The education element is not as good as Broderbund's acclaimed The Playroom series - the focus is more on having fun. But still, if you are looking for a small edutainment title about animals, this final EA*Kids product is well worth a look. Too bad the enhanced CD-ROM version was cancelled in beta as EA shifted its focus to produce - you guessed it - more profitable sports games. 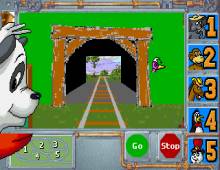