One of the best Carmen Sandiego clones, Mario is Missing is a fun edutainment title that is aimed at educating kids ages 8-12 about the world's geography and history. As the title suggests, it stars Mario, Nintendo's most famous character whose reputation went far beyond the console. The plot will be familiar to any Mario fan: Bowser, the arch-nemisis of brothers Luigi and Mario, plans on kidnapping all the wold's most famous artifacts. So Mario, as usual, goes off to Bowser's castle in Antarctica to confront this villain, only to get captured himself. Now it's up to Luigi to find his bro and, while he's at it, recover all the world's treasures.

While there are some jumping and platform-style maneuvers similar to the Nintendo games, this is no arcade adventure. Mario is Missing is actually a cleverly disguised voyage of discovery around the world, learning about various cultures, geography, and history. There are dozens of cities to visit around the world, and in each one you have to ask the locals to find out where you are so that you can direct your pal Yoshi to come to your assiatance (he's still waiting in Antarctica). You've also got to find three evil koopas who are prowling the streets, having stolen three famous artifacts from the city's tourist attractions. Whenever you learn some interesting facts about the objects you're carrying, take note, because the girl in the tourist office will be asking you questions to make sure that you deserve the reward. The controls are a bit more complex than your average arcade games: you can talk to people, swap artifacts around, check out the city map, recall past conversations and call up a world map for summoning Yoshi. Overall, Mario is Missing won't give Carmen a run for her money, but it's still a very entertaining game for anyone who is not joystick-shy. The streets are a bit too repetitive, though, so a lot of patience is required. 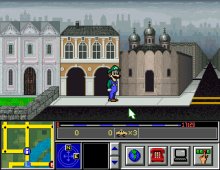