One of the best CD-ROMs ever made and in my humble opinion the best software ever made about Shakespeare's works, Voyager's Macbeth is a masterpiece in literary CD-ROM. The CD not only includes the fully indexed and searchable text of Shakespeare's famous tragedy (based on the recently published Cambridge edition, edited by one of the CD-ROM's co-authors, Professor A. R. Braunmuller), but more importantly the *complete audio performance* of the entire play by the Royal Shakespeare Company, directed by Trevor Nunn, which stars Ian McKellan as Macbeth, and Judi Dench as Lady Macbeth. Definitely one of the best renditions of the play ever performed.

In terms of user interface, Voyager outdid themselves with Macbeth. Not only can you jump to any page or word, but you can also click on any line of the play to go directly to that place in the RSC's audio performance and hear it read out loud. There are numerous notes, anecdotes, and glossary items (over 1,500 of them), all of which are hyperlinked and indexed, and 25,000-word worth of extensive essays that analyze the play in detail. And if that's not enough, you can view video clips from other performances of key scenes, from Macbeth movies directed by Akira Kurosawa, Orson Welles, and Roman Polanski. To top it all off, there's plenty of maps, charts, and images to make this the definitive CD-ROM about the play. As always, you can copy any text from the CD-ROM to paste it into a word processor of your choice.

Macbeth is without a doubt another high quality title from Voyager, one that successfully marries the scholarly expertise of the authors -- in this case Drs. Rodes and Braunmuller, two Shakespearian scholars -- with Voyager's technical and design expertise in creating attractive CD-ROMs. If you have even a slight interest in Shakespeare, this wonderful CD-ROM is a must-have. 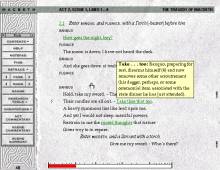