We think of Douglas Adams as the author of the Hitchhiker's Guide to the Galaxy--in other words, as a superb chronicler of other-worldly life forms and one of the funniest people in the world. In Last Chance to See, Adams's habitat is earth and his subject is a serious one, but his sense of humor comes through intact. Here is an interesting tidbit of how the book came about, from Voyager's website: "In Adams's words, this inspired collaboration began when "by some sort of journalistic accident" he was sent to Madagascar with Mark Carwardine to look for an almost extinct form of lemur called the aye-aye. (This passage in the CD-ROM is accompanied by a photograph of Adams holding a lurid stuffed version of the hapless animal.) Adams supplies the narrative and Carwardine the zoological expertise, which is lucky since Adams describes the aye-aye as "a very strange-looking creature that seems to have been assembled from bits of other animals." So begins an odyssey which takes Adams and Carwardine to the remotest corners of the earth in search of animals on the edge of extinction: vanishing elephants, egrets, rhinos, dolphins, and more. Getting there is seldom half the fun (imagine twenty hours on a small boat with a goat killed three days earlier--Komodo dragons like their meat smelly), even when the destination offers more poisonous snakes per foot than any other spot on earth ("Don't get bitten," advised an international expert on venom when consulted by an anxious Adams). Adams's adventures are punctuated by reflections on evolution, the human animal, and the variety and fragility of life on our planet.

The CD also contains pop-up sidebars about each species and its current status, menus for creating custom collections of data and images, and audio segments from the BBC radio series based on the book by the same name. The CD's design is nothing special, but we were seduced by Adams's hilarious narrative (he reads the entire book aloud), by the spectacular color photographs (over 700), and by the author's evident passion for these rare creatures. If National Geographic had teeth and a sense of humor, it would look something like Last Chance to See."

"Teeth and a sense of humor" indeed. And a great dose of gentle sensibility and Douglas Adams's skewed (cynical, in a funny way) view of mankind that fans everywhere will recognize. The photographs and anecdotal information are excellent, but the real discovery here is listening todams read the entire text aloud with great love and care. Even as you chuckle at Adams' gentle humor, you will be learning about such serious issues as how world population growth is pressuring the natural world, endangering many animal species. The CD works well because of Adams's droll humor on a topic that has no joviality of its own: he narrates the tale as if he, too, expects to become extinct at the hands of bureaucrats (on a side note, play Bureaucracy, the game he designed for Infocom, for a humourous jab at bureaucracy). There is no multimedia pizzazz here -- just Adams reading one of his most underrated works on an issue that he deeply cared about. So just sit back, listen, look at the photos, and follow the anecdotes on each species. It's a fascinating journey, and one that will make you realize how selfish we humans can really be. Highly recommended. 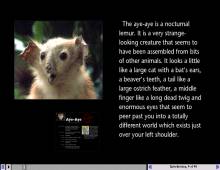