The Learning Company developed a number of excellent but sadly underrated children's titles in the mid-80s based on the same engine that combines ease of use with fun educational puzzles. Gertrude's Secrets is one such forgotten gem in this series.

Designed for younger gamers than the better-known The Robot Odyssey, Gertrude's Secrets helps 4-7 years old toddlers develop basic shape and pattern recognition skill and fundamental logic via 7 different puzzle rooms, each of which features a variation of the same theme. Array puzzles, for example, require player to complete the sequence with appropriate shapes based on other sequences, while Train puzzles require that every pair of connected boxes contain pieces with different shape or color. Contrary to what one expects, the game's limitation of only a few colors and shapes do not make the game repetitive because each puzzle is different enough from one another, and some of them can be quite challenging. Solving each room (which has several puzzles of the same type) yields a treasure to be collected in the Treasure Room.

In addition to fun gameplay, the game also includes an outstanding tutorial and "Storeroom" feature where players can pick up new sets of pieces to use in puzzles, and even edit old ones if they become too familiar already. The interface, as in The Robot Odyssey is as intuitive as it gets: everything is done by pressing the SPACEBAR key. In short, Gertrude's Secrets is a great game that even decades later is still better than many CD-ROM edutainment titles today. Highly recommended for 4-7 years old! 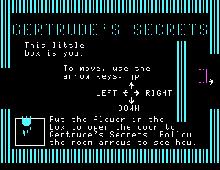