It may sound incredible to you but this game was made in 1979! It is a simple game of chess in which you can pick the side and try to win. Nothing more, but what did you expect from such an old game? Still, the computer AI is still rather high and it's not too easy to win. Heck, on some higher levels it even seems impossible even for some experienced chess players!

Mychess was developed by David Kittinger. Anyone who's not a fan of chess may not know that David is among the best computer chess designers today. After Mychess and its sequel, he developed the popular Chessmaster series for Software Toolworks, and Wchess, one of the most celebrated computer chess programs ever created (and the engine behind Sierra's Power Chess).

So what kind of chess does this 10+ year-old game play? Very challenging one, indeed.

The game's hallmark is the strong computer opponent. There are nine difficulty levels, the lowest three of which will not prove too difficult for anyone who has played in some amateur tournaments. But at the six higher levels, Mychess provides a real challenge for seasoned players. The game lacks mouse support (not surprising, given its age—PC mouse wasn't even made in 1979!), so you have to move pieces using standard chess notations. This is not cumbersome, though, and the game even offers instant printout of move history on your printer. The graphics are amazingly crisp for 1979—the pieces in hi-res black & white look much better than many later games.

Overall, Mychess is a must-have for every chess player. It's not just a real "oldie" with historical value—it plays a mean game of chess. 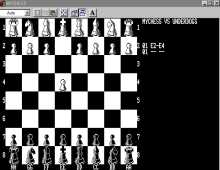 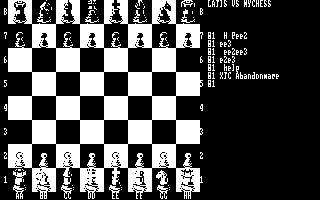