Hitler's War is a solid fanmade translation of Avalon Hill's tabletop war game for Windows. In this "introductory level" wargame, you can lead the German army as Hitler against human players in hotseat, LAN, or Internet modes. There is no computer AI, so the game is useful only if you can find someone to play against. Since the game is very faithful to the board original, the excellent blurb and user review from Boardgamegeek.com apply to this PC version just as well:

"The game examines the war in Europe at several levels. Operation Barbarossa concentrates on the great ground struggle waged for four long years between Stalingrad and Berlin. The Fall of Germany begins at the eve of the great amphibious invasion of France and expands the war into the West. The War for Europe completes the picture with an examination of the entire 6 years of war in all of its ramifications. Great fleets of bombers may be launched towards enemy targets; swift Axis raiders joined by their deadly brethren, the U-Boat, can attempt to break the British supply line with America; mighty armadas may sail to challenge, in combat, for control of the seas, and much more.

But HW does not limit one to just the kind of tactical or strategic decisions normally expected from a wargame. The great choices that faced each government must also be solved. Questions relating to war direction, production priorities, and research allotments become as important to ultimate victory as when to invade Russia or how much force will be needed to overrun France. Should the Allies attempt victory through airpower? How much should the Axis invest in large mechanized armies versus the construction of U-boats? And who could build the atomic bomb first?

[User review]: I gave this game a 6 out of 10, not because of any failings within the system but more because it's such a basic simulation. Being able to abstract a large-scale or global conflict well is a tough nut to crack. A few manage to do it well - such as Axis & Allies, of course - and Hitler's War does it well, but its abstraction didn't have the enjoyment level for me that A&A provided. Units are represented at the Army, Front, and Army Group level, so you know the level of abstraction is high. Each of these units may have assigned to it a number of strength points, such as infantry, armor, airborne, and the like, although I believe there are limitations on the total number of each that may be assigned. Also, Leaders make an appearance and can influence the armies they lead.

Attacking is simplistic, but interestingly the player must 'attack' an empty hex in order to conquer it. The empty hex is assumed to have a strength of one point of infantry, if I remember correctly. This is a nice feature, especially given on some fronts a player cannot cover all hexes (especially in Russia!), but one point of infantry will not stand up to a large army's determined assault. The weapons research is pretty nice also, as any power can research the A-bomb (among other things). Overall the game is pretty nice, but more work than an abstracted title should be. I'd still pull this game out every now and then, though - it's worth having if you have little ones that you want to eventually break into the hobby; this would be a great title for that." 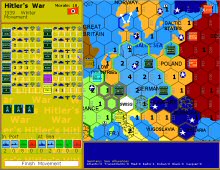