Hexxagon for Windows is a superb fanmade remake of a 1992 game of the same name from Argo Games. Hexxagon, in turn, is a variant of a neat strategy game called Ataxx which is implemented in Spot for DOS and subsequently the Microscope game in The 7th Guest (which was designed by Graeme Devine, the same designer who made Spot). In this game for one (vs. the computer) or two players, your goal is to take over the board by moving your pieces into the spaces adjacent to your opponent's pieces in order to "morph" them into your color, thereby gaining control. The game is over when one side gains complete control over the pieces, i.e. there is no more red or blue piece left on the board.

The game is essentially a nice Othello clone, and Windows version, coded in Flash, is a near-identical version of the original - although the computer player in this one is easier to beat than in the original. If you enjoy abstract board games or have played the 1992 DOS version, this is one game that will occupy a permanent spot in your hard drive. 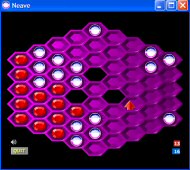