Diam is a cool Flash version of a neat abstract board game for 2-4 players that makes an ingenious use of the third dimension (i.e. height). The goal of the game is to place 2 pawns of identical color on 2 diametrically opposed spaces - and at the same height. This is called a "Diam." On each turn, you can either place a pawn on to a facet, or move it one space around the board. You can stack pawns on top of any other color, up to a height of four; when you move a pawn one space, you also move any pawns stacked above it, including your opponent's. The relatively small board size means that Diam is a quick game - each game lasts only 5-6 minutes at the most, making it a nice way to spend a short break.

This Flash version brings Diam to the PC screen faithfully, with decent computer AI and crisp graphics. Since the colors of pawns in the actual board game are hard to tell apart (black and dark brown), this computer version is actually better in that regard. If you are looking for a neat, modern abstract board game that is more interesting than checkers but easier than chess, Diam fits the bill. 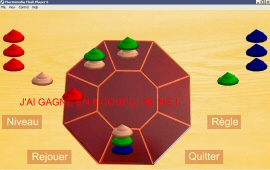