Akron is a decent PC implementation of the abstract board game of the same name which was invented by Cameron Browne. In the author's own words: "Akron is a new connection game played with marbles on a square grid. Two players, Black and White, strive to connect their edges of the board with pieces of their colour. Each turn a piece can be played at any empty board point, or a piece already on the board can be moved to any connected empty point. Most games in the connection family, such as the classics Hex and Y, tend to be hexagonal in nature to avoid problems with deadlocks in the plane. Akron solves this problem by letting players stack pieces over enemy blocks. In fact, stacked connections cut any connections they pass over, making upward growth a very strong play."

As the author implies, the ability to stack pieces (basically the third dimension) adds additional challenge to the connections game. The PC version of Akron features a decent computer opponent whose strategy can be toggled in the middle of a game. Recommended for anyone looking for a refreshing abstract game to play that is easy to learn and can be finished in 15 minutes. 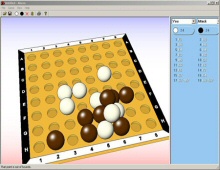