Advanced Civilization is another one of Avalon Hill's classic board games of which they made a faithfull conversion. Unless one has actually played the board game and realizes what's going on, however, the can seem confusing, abstract, and dry. In contrast, if you have actually played the board game, then you will find this a fun and playable recreation of it. It keeps the same details right down to those lovable trading deals full of deceit and treachery.

One word of warning for the people who play this game (one that appears on the Civilization board game box itself): Advanced Civilization is NOT a wargame! It is an economy/empire managing game where trading has more of a place than warfare. With each of your cities you get a trade card representing a good (like salt or grain), and with it you barter for mutually beneficial deals which increase your value in points. With points you can get advances (such as roadbuilding or architecture) that make your empire management easier. Along with these trade cards come calamity cards, so you never know whether you are getting salt or barbarians [G]. The AI can be tricky, especially for newcomers, but is far from impossible. For those of you who have played Civilization, and even some who haven't, I found this game to be a very fun and a perfect conversion of it's predecessor that is definitely worth the hefty download. 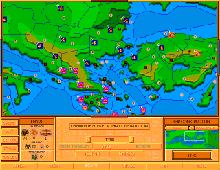