ZPC is an original first-person shooter from Zombie that you will most likely either love or hate (I love it, incidentally). If any action game deserves a label "artistic game" (much like The Dark Eye does for the adventure genre), ZPC more than fits the bill, with its strong and unique "underground comic book" style that permeates the whole game, from the cutscenes to the action. The plot combines a post-apocalyptic Mad Max setting with pseudo-religious trappings that are reminiscent of Preacher comic book series, mixed with a dash of Nazi-style propaganda for good measure. You are Arman, a violent, carefree hippie who must liberate an entire world from the clutches of an evil imperial empire that has destroyed a once prosperous Republic. As it turns out, you are actually the prince whose father, i.e. the former king, was killed by the evil Black Brethren. As a messiah who has returned to save the world and claim your rightful heritage, you must literally kill everyone who stands in your way while tolerating seemingly ubiquitous loudspeakers that blare propaganda nonstop.

Now, let's get all the negatives out of the way first, before I explain why I think ZPC deserves a Top Dog tag. Although the game has a unique graphical style, there is nothing in the gameplay department of ZPC to make it stand out from dozens of Quake clones. The weapons are uninteresting, and the save game method is infuriating. To save, you have to find and pick up "memory orbs" that are scattered across the levels. Each time you save a game, one of these orbs is exhausted. This means it is impossible to save the game again until you find another orb. While this effectively forces you to be more careful, it is an annoying throwback to the console system that PC gamers should not have to put up with. To add insult to the injury, you also have to tolerate a less-than-perfect control scheme. For some unexplained reason, you have to use your "Chi" mental power to jump, move objects, flip switches, and open doors. To jump you have to look to your back, down at the ground, and then "Chi-punch" the pavement. This is unnecessarily tedious and frustrating, especially when you are being attacked.

So what about ZPC that compels me to keep playing? The compelling plot and artistic style, for one. Cutscenes that advance the plot are triggered at different times in the game, and these are some of the best cutscenes I have ever seen (as effective as the comic-book-panel cutscenes in Sierra's Gabriel Knight 1.) The enemies are also quite imaginative: they include Nazi-lookalike foot soldiers, the "cowardly bureaucrat" who are often seen skulking in the shadows, a dominatrix, and the nasty members of the Black Brethren itself. Each type of enemy represents a certain type of lost soul, and come off quite effectively as symbols.

But what makes ZPC one of the better FPS games in my opinion is the length it goes to convey the consequences of violence. Unlike DOOM, Postal, and a myriad other FPS where you can gleefully kill hundreds and thousands of living beings without any repurcussion, the ZPC designers deliberately structure many sequences to offer you several options (inaction being one of them), and then show you the results of the choice you made. For example, you will enter one room to see a few of your starving worshippers begging you for help. You will also see a strange machine that has buttons you can manipulate. What you will see after pressing a few buttons is the gruesome scene of the machine (which you will recognize by now as a food processing machine) slowly crushing your hapless worshippers to a pulp. It is gruesome, and the evocative art makes the shock you feel even more effective.

Although gameplay-wise it is no different from Quake clones, to call ZPC a "typical kill-everything-in-sight FPS" is missing the point. This is a game that tries to portray the difficult subjects of genocide, omnipotence, and morality, and does it very well. And when a game is able to provoke thought in addition to adrenaline rush, its gameplay deficiencies seem all but forgivable. Highly recommended, but only to those who are open-minded enough about what a FPS could be, but not to those who are looking for a "Quake killer" type of game. I wish more FPS were this way. 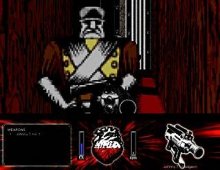