Zone Raiders is a decent 3D futuristic driving combat game that unfortunately doesn't offer anything to set it above Wipeout XL or Quarantine. In the game, you play an independent "Raider" who must enter a zone to retrieve, destroy, or activate various items and escape successfully. During your raids, you must elude capture by Zone Patrols, and battle enemy vehicles utilizing an array of weapons.

Zone Raiders is fun - but unfortunately only for the first few hours or so until you see all its 16 tracks. It's neat to fly the hover car, but once the novelty wears off the rest of the game becomes quite repetitive, especially because enemy cars pose very little threat. In contrast to the bustling streets of Quarantine (albeit populated with cookie-cutter clones), the gameworld in Zone Raiders feels empty and ultimately boring. If you enjoy 3D action games, this lackluster old game may entertain you for a few minutes - until you realize how dead average it is. 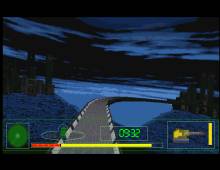