Yo! Joe! is a nice two-player jump'n run game by Scipio, published by Hudson/Play Byte (Blue Byte). The option for two players to play together is not seen very often in this kind of game, so this differentiates the game from other cartoon platform games on the market. Other than that, it's a standard jump'n run with some fun elements, smooth graphics, good level design, and a plethora of enemies. Recommended if you want to play something with a friend in co-operative mode for a change, but otherwise the single player gameplay isn't addictive enough to keep anyone glued to the screen for hours. Close, but no cigar. 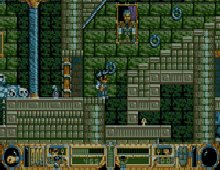