XWing Fighter is a decent BASIC game released by IPCO, the first PC publication, way back in 1982. You are an X-Wing pilot leading an attack on the Death Star - or more specifically, its small unshielded exhaust port which you must hit directly with a torpedo. As you approach, hordes of Imperial fighters and Darth Vader himself will try to stop you. Your fighter is equipped with lasers to fight the imperial fighters and Darth Vader, and three torpedos to use against the Death Star.

The game is pretty decent, except the cockpit window is too small to clearly see the enemy ships or incoming fire until it's too late. As a BASIC game made in 1982, though, it could be much worse. Worth a look for historical value, but for a really good example of what the PC was capable of back in 1982, play Space Strike or Cosmic Crusader instead. 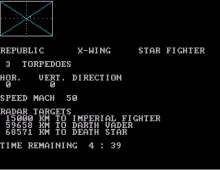