One of the most graphically violent games ever made, XEvil is probably one of a handful of games that manage to be this offensive and controversial and get away with it. The game features an incredibly addictive gameplay that will have you laugh like a maniac while blowing up enemies in imaginative ways. Liberal references to the software industry also makes this a great game for any programmer who feels too much like Dilbert and has to let off some steam - preferably against hapless human victims ;)

The premise is there just to justify the no-holds-barred gameplay, but here it is anyway: you have died and gone to Hell. XEvil is the contest that determines your fate, i.e. what you will spend the rest of eternity in Hell doing. As the manual says, "...at the end of a game, you receive one of many possible rankings. A poor player, for example, may spend the rest of time as "Satan's Earwax Remover", while a good one might achieve a prestigious title such as "VP of Hell Marketing" or even "Lead Software Engineer of Hell". Simple enough, eh?

Gameplay is simple, with crude graphics that are strangely appropriate. The game is basically a free-for-all Death Match, played from a 2D side-scrolling perspective. The XEvil world is a randomly generated two-dimensional map composed of walls, floors, ladders, horizontal and vertical movers (elevators), and doors. The maze algorithm guarantees every character that can at least walk and climb ladders can get from any room to any other room. Each level randomly chooses one of several graphical "themes", e.g. a "Mayan" theme, a "Medieval" theme, an "Industrial" theme. You can walk, climb ladders, climb on walls and ceilings, fly, use weapons and items, and/or fight hand-to-hand depending on a specific set of abilities. At the start of each life, you are randomly given one of the characters to play. One time you may be a "Ninja", next time a "Chopper-Boy". To succeed in the game, you need to learn all the abilities and weakness of major characters. This is one reason the game is a lot of fun: just when you think you have seen it all, the game throw you into an all-new arena with a new theme, controlling a character you haven't seen before. The characters are humorous, and very original. You can build up characters with more powerful weapon and items, with shields, or by earning bonuses like double health, double speed, hellfire powers (light enemies on fire by touching them), or healing powers. Another fun aspect of the game lies in finding the "killer" weapon/item combo that gives you an edge in a multiplayer Death Match.

XEvil has a plethora of cool weapons that make it very addictive. For instance, you can use a "Soul-Swapper" to swap souls between your body and someone else's. This allows you to take over powerful enemies just as your character is about to die. Then there is a frog-gun, the Transmogrifer, cloak (gives you limited invisibility) and even Doppelgangers and Dog-Whistles that give you followers who help protect you and attack enemies (and you even get credit for their kills). And if you don't want to play against human players, you can play in a single player mode, although this is a lot less fun. The objective in single player is to kill all the enemies on each level to advance to the next. After every five levels, you must complete a scenario with specific tasks, e.g. "capture the flag".

With a lot of inventive weapons, characters, and flawless network play (supports Windows, Linux, and other UNIX systems), XEvil is a must-have for anyone interested in straightforward mayhem. Be warned of the game's offensive content, though: drugs are used liberally in the game (Cocaine keeps you awake and make you run faster), and the mention of Satan and various minions of Hell, although cast in a humorous light, make this game unsuitable for young children or anyone gullible enough to believe it ;) Otherwise, it's a great game you will get hooked for days, especially in multiplayer mode. 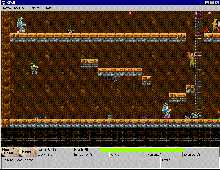 People who downloaded this game have also downloaded:
X-Men: The Ravages of Apocalypse, Zombie Wars, X-Men: Children of The Atom, X-Men: Madness in The Murderworld, X-Men 2: The Fall of the Mutants