Xatax is a side-scrolling shooter that doesn't add any revolutionary concept to the genre, but does what it does well: furious action, tons of power ups, endless waves of enemy ships, and well-designed levels. A fun and harder-than-average shooter that bodes well for the fledling company. 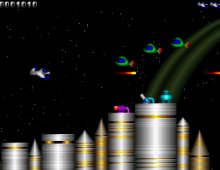