Zool and Zool 2 are above-average 2D platformers from Gremlin that are quite obviously ri....err, I mean, 'inspired' by SEGA's best-selling Sonic games. Instead of the quirky hedgehog, you control a similar-looking cartoon character: Zool, the 'Ninja from the Nth Dimension' who must (what else) rid his world of an evil mastermind. Your goal for each stage is simply to collect goodies and beat the boss monster to progress.

Although the premise is passable and the graphics are quite nice, both Zool games are unfortunately very repetitive: despite having a good number of levels (18 stages spanning 6 worlds), the levels don't look very different from each other. Nowhere near as imaginative as Shiny's Earthworm Jim, for example, although the monsters are quite imaginative.

The games do have some neat power-ups (including one that gives you a doppledanger who'll replicate your actions a few seconds behind), and nice variety in Zool are three hidden sidescrolling shoot-em-up bonus games, although they are very difficult and almost impossible to find. Zool 2 is a much better and more varied game because you can control Zool's female sidekick named Zooz, who can break grounds beneath her while Zool can only break ceilings above his head. This means there are 2 completely different paths you can take to finish the game, so the game is worth replaying at least once. They are also quite difficult games, but fortunately you can change the difficulty level to make life easier.

Overall, I find Zool games little more than a better-than-average title despite some nice ideas. They are decent Sonic-style games, but without the 'just one more level' quality. Worth a look if you like cartoon-style platformers, but they are no top in my opinion. 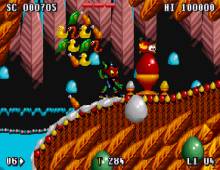