A fun little freeware gem from David Bayliss, X-Fighter is a simple top-down shoot-em-up that is deal for a few minutes of simple, clean arcade fun in 4-color graphics. Gameplay can be summed up in two words: shoot everything. It's not original by any means, but still quite fun, especially with various types of enemy fighters that have different movement patterns, etc. Overall, another forgotten early freeware title rescued from the depths of time - especially for old-timers who miss the good old days of BBS before the dawn of the Internet :-)

Well, the aim of the game couldn't be simpler, just shoot every ship in sight! Personally, I found the first couple of levels the hardest as I had to actually sit there and shoot all the planes, even though they insisted on flying as slow as they could, and you don't got all that fast either. So, as you can tell, it starts off relatively easy.

The enemies that you have to shoot do change, they get a lot smarter and also vary their movement patterns as you move up through the levels. Enemies also have the ability to shoot back at you, and this gets more frequent as you increase levels. I never have gotten to the last level so I cannot say how many levels there actually are, but as you progress up through the levels it gets very hard indeed. Lovely colours to keep you happy for hours. True, there are only four colours, but ask yourself, do you really need more? I thought that considering this game was made in 1986, the graphics are rather good. ;)

I recommend this game as one to keep you busy for quite a while, or as a game to just load up when you have a bit of time to spare. It's a gem of a game, download it and see for yourself. 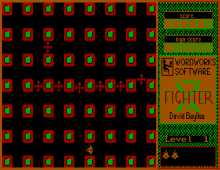 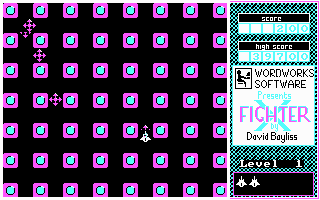