Wizard of Wor is an excellent remake of Midway's hit arcade game of the same name. The idea: one or two players move around a variety of line-drawn mazes shooting the creatures that wander within. Eliminating all of the monsters will advance the players to the next level. Creatures called Worluks and the Wizard Of Wor himself will occasionally appear and these can be shot for bonus points.

The game has a variety of mazes and is played from a bird's eye view perspective similar to Pac-Man. One of the most fun elements of Wizard of Wor is the backstabbing nature of the 2-player mode (insert Machiavellian chuckle here): although both players work together to clear the mazes, you score points for killing your partner. Another thing that makes the game fun is the many bonus point situations and gameplay variety. For example, if you can shoot the Worluk before it escapes, the next maze will be scored at double points. Although the mazes change from level to level, the monsters remain the same types: blue, wolf-like Burwors are common in the first few levels, while the tough yellow Garwors and red Thorwors roam later mazes. These two monsters can turn invisible, forcing you to keep one eye on the radar at the bottom of the screen to avoid any unpleasant surprises.

This PC remake does Midway's original justice, with smooth graphics and the same addictive gameplay. There are new graphics that aren't present in the original, as well as a neat doorway system and many more devious mazes. If you enjoy a good arcade game, you definitely must play this faithful remake. 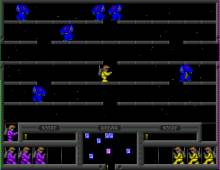