Wire Robo is a fun and unique shooter that plays like a cross between a regular vertical SHMUP and Wire Hang Redux, reviewed elsewhere on this site. Instead of piloting a ship, in this game you control an anime-style robot that is equipped with a grappling hook. To destroy enemies (mostly ships and asteroids), you have to first swing to them, then attach your robot to them by shooting the grappling hook. While attached in this way, you can swing left and right to shoot in the direction you are swinging. Although this strange gameplay takes some time to get used to, Wire Robo becomes a lot of fun once you get the hang of its swing-and-shoot mode.

As if the unusual gameplay isn't challenging enough, Wire Robo is shock full of many enemies, including large ones that shoot heat-seeking missiles... each of which shoots normal bullets at you. The graphics is slightly pixelated, but the robot and most enemies are big enough to differentiate. Superb background art and excellent music and sounds round off this neat game from Japan. Recommended, especially to anyone who likes difficult shooters that are a departure from the norm. 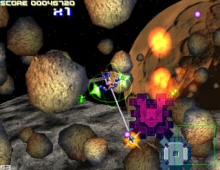