Released between Panda's Sango Fighter 1and 2, West Adventure is a fun fighting game based on Xi You Ji ("Pilgrim to the West" in English)-- one of China's most popular literary epics that tells the story of the pilgrimage to India of a Chinese monk and his superhuman entourage that comprises a monkey, a pig and a tortoise, each with unique powers. As one of these disciples, you must fight evil minions along the way to India. A lot of fun in 2-player VS mode :) 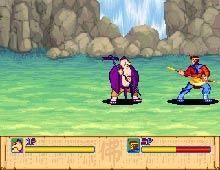