We're Back: A Dinosaur's Story

We're Back: A Dinosaur?s Story is among a handful of games based on movie licenses that break the trend: the game is actually better than the movie. While it doesn't rival the best of Disney's platform games based on its hit movies (e.g. Aladdin and The Lion King), it does come quite close.

The game?s plot mirrors the movie's. An extraterrestrial mad scientist named Captain NewEyes kidnapped four hapless dinosaurs from their time period, and increased their IQs to the point where they can speak (English) and feel emotions. Captain NewEyes then offers the quartet a chance to travel to the future with him, where millions of children are waiting to make friends with them. The future, in this case, is modern-day New York City, and the quartet must make their way to meet the kids.

Similar to many other platformers based on movie licenses, gameplay consists of a series of mini-arcade games, each based on an episode in the movie. The game is surprisingly playable and fun, comparable to some of the better Disney platformers, and the arrangement of the subgames is quite logical. Aside from fun mini-games that let you control both the dinosaurs and some of the kids, We're Back features sharp, colorful VGA graphics and some of the smoothest 3D sprite scaling in games of this kind. In short, this is one of Hi-Tech's better efforts, and well worth a look for everyone interested in the movie or fun, not-too-difficult cartoon platformers. 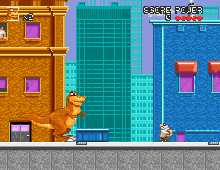 We're Back: A Dinosaur's Story screenshot