Good conversion of Taito's popular arcade game of the same name. The PC version adds many bonuses and extras to the original from the early 80's. The game is very similar to an early game called Qix: you take control of an object whose purpose is roam the screen, closing rectangles and removing them from the playfield. The goal is to clear 80% or more of the screen, and each additional percent adds more points to your balance. As an arcade conversion, Volfied features 1- or 2- player games in three difficulty levels but no passwords or saved game feature. It is much more difficult than the original arcade version, although there are three levels of difficulty to choose from. Overall, as fun and addicting as the original, with dozens of levels to ensure that you'll keep coming back to it for a while.

Plain said, you are the pilot of a starship who is the only hope to save earth... pretty weird story for a puzzle game, isn't it? well, the game concept itself is quite original... as you move your ship you lay behind you a "line" wich cuts part of the scenery as you go on... the goal is to "destroy" in this way more than 80% of the screen... if you do so, all the monster ships in the screen will be destroyed, and you can proceed to the next level...

Graphics and sounds are both okay... in truth, they're pretty good for the time, this game surely deserves the small download.

In this topdown viewed game you play the same game as Styx. You have to draw rectangulars on the screen in order to segment off parts of the screen. When you've got around 80% of the field, you go to the next level. 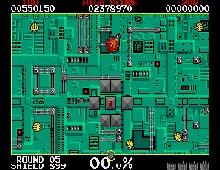 People who downloaded this game have also downloaded:
Golden Axe, Prehistorik 2, Prince of Persia 2: The Shadow and the Flame, Super Space Invaders