Ok, the story is stupid. The game? Not much better. A simple 3D shooter, very Doom-like, just with boring levels, worse graphics and hardly any new ideas. One of the few positive things to mention is the nice music and the average till good sound effects. This is the floppy version of the game that doesn't include the terrible CD music tracks. This game is not cracked, so be sure to get the near complete copy protection answers list below. 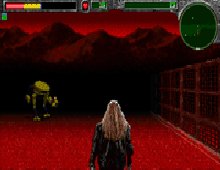