The sequel to Body Blows, this game is centered around the revenge of Max (otherwise known as the cyborg T17) and his gangland cronies. Each character from Body Blows is included, and an incredible amount of new characters are selectable as well. This game's strong points are its wonderful, animated background stages, crisp graphics, and melodious music. Weak points are the fact that the characters are stiff, have limited attacks, and are difficult to control. A great game overall, but it can easily get boring if you don't figure out the controls quickly. 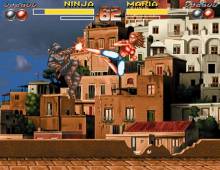