Violent Myth is a lackluster 2D fighting game that botches the very interesting premise by poor execution. Although it looks and feels similar to Panda Software's famous Sango Fighter, the game is not half as fun. The setup is interesting though, at least for anyone familiar with Chinese legends: you control one of eight mythological figures (most of whom are either an angel, famous fictional generals) in a duel to the death against the others. Although the backdrops and characters are well-drawn, the actual gameplay is more frustrating than fun. Most attacks are difficult to execute, but at the same time, the computer is not bright enough for you to worry. Computer-controlled players seem to have very poor AI, as they execute "special" combo attacks only rarely, and spend a lot of time doing curious things (like performing complicated attacks that don't actually *hit* you). The animation is decent, but jerky compared to Panda's games or the likes of CAPCOM's classics. Overall, Violent Myth is worth a look, but only if you are interested in Chinese myths or games from Chinese houses other than Panda. 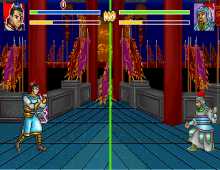