In Ugh! you are a stone age taxi driver. You have to take people from platform to another. There are dinosaurs and other creatures on your way so the task is not so simple. Your man-powered stone age helicopter will be destroyed if you land with a high velocity, but if you carry people fast enough you will receive multipliers that multiple the amount of score received when a person is carried to a platform.

Ugh! A game about a caveman with a flying taxi. Weird, isn't it? Little bit of action, but a bit more puzzle-like in style this game comes up slowly hooking ya. Pick up your passengers and fly them to whereever they tell you. Beware of flying dinosaurs and other things. The game has a unique concept both funny and challenging as the levels are different enough to make you play on. A nice small game that is more than worth the short download-time.

Good conversion of the Amiga game. Ugh! is a neat clone of Space Taxi, a great Commodore 64/Amiga classic that was never made for the PC. Instead of a future scenario, Ugh! is set in the direct opposite time period: prehistoric era.

As in Space Taxi, Ugh! is all about flying around in various single screen 2D landscapes, picking up people and flying them to wherever they want to go. Each single-screen level contains a number of platforms which you can land on. When you start playing, some small people will appear on the platforms, waving at you. If you land near them, they will board your prehistoric taxi and tell you which platform they want you to fly them to. You will get extra bonus points for getting passengers to their destination before time runs out.

What makes Ugh! a lot of fun is the devious layout of levels, all of which are filled with various traps, switches, doors and other things which will either hinder or help your progress. Some levels feature strange physics that affect your control of the taxi, while others contains magnetic fields and wind. In addition to all this, you've got to watch your fuel reserves. Each level has a refuelling platform, but fuel costs points. For every unit of fuel you get, you'll pay with a point from your score.

Ugh! requires both reflexes and careful planning to succeed. The levels will start off very easy, but once you begin to get used to the controls, you will be presented with much harder challenges. Space Taxi fans will find Ugh! incredibly addictive, both as a solo- and multi-player game.

A fairly simple game which reminds me an awful lot of the game Space Taxi. You're some prehistorical figure with some kind of helicopter-bike and you have to transport people to their destination platform. It may sound easy, it's not. Your wooden bike-chopper isn't that happy if you land too hard or if you crash into platforms, walls or birds.

The game isn't that fun until you find someone who is at least as bored as you are and plays along. The multiplayer function can make this game actually a rather fun game to play!

Ugh will never become one of my favourites, but it's good for a smile. I'm not recommending it, but if you feel you don't have anything better to do at all, try it!

Pilot your home-made airborne caveman aircraft to pick others up and drop them to their desired destinations. Very fun game! 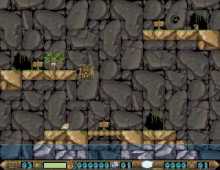 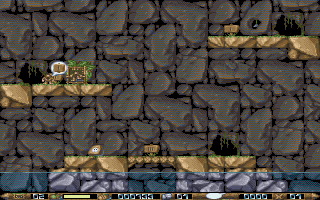 People who downloaded this game have also downloaded:
Shufflepuck Cafe, Tintin in Tibet, Out of This World (a.k.a. Another World), Pandemonium 2