One of the rarest early games by John Romero of id Software fame, Twilight's Treasures is a decent little action game included in Softdisk's Big Blue Disk Sampler disk, made to promote the company's "Big Blue Disk" - a monthly on-disk magazine that features a number of useful utilities and small games with each issue. Your goal in the game is to dive down to grab a chest and resurface unharmed. There are numerous dangers you have to avoid, including sharks and eels, and even floating mines on higher levels. You also have a limited supply of air, so you have to time your approaches carefully. Not revolutionary by any means, but still a nice little game that showcases Romero's flair for fluid controls and smooth animation years before Wolfenstein 3D. It reminds me a bit of Octopus game on Game & Watch too - anyone old enough to remember that? 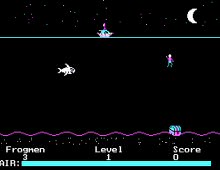